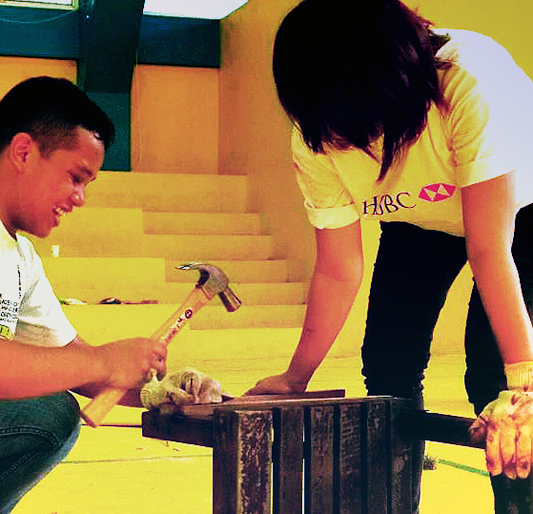 Coming to the office was a bit of a stuggle. Whether by braving the MRT lines, or by sharing cabs with strangers, traveling from my dorm in Katipunan to Paseo de Roxas was difficult and eye-opening at the same time. But not once did I think it was not worth it.

Coming to the office meant seeing the faces of people I so admired for their intelligence, creativity, and sense of humor. The staff at TFP is the single smartest group of people I’ve ever met. As a Marketing & Events intern, I learned so much from my supervisors; from arranged workshops on public speaking, to on-the-spot Photoshop tutorials when I needed to finish a task. The projects handed to me allowed me to apply my own creative decisions, and I constantly learned from everyone’s quick and thorough feedback.

I spent some good times on the field with the Admissions team, at recruitment talks and booths in UP-Diliman. I also met with the TFP Fellows of Malanday Elementary School as they opened Brigada Eskwela 2015. And then there was the rED (Renovate to Educate) event at Highway Hills Integrated School where I was able to meet and work with HSBC employees in their renovation project (photo above!)

Coming to the office meant being one step closer to seeing the world (hello friends!). From four countries, ages 15-21+, we were quite diverse. I learned so much from them while working on a team project that concerned a lot of Excel (which I knew so little of prior to TFP). Between lunch breaks and frozen yogurt, we never ran out of things to talk about. I gained a new appreciation of how beautiful our differences make us, and that even as we’re different, we’re really just the same.

Coming to the office meant seeing an amazing group of people. These were the individuals I want to be when I grow up. They saw the world and came home—to make the Philippines the great nation it has always wanted to become, with little steps, getting bigger and bigger each time. They never forgot the smaller kindesses of everyday even as they were working towards nation building.

Coming to the office was a struggle, knowing that the team existed because of a very real problem affecting the lives of millions and the Philippines as a nation—educational inequity. I struggled to learn and keep up, but I did so in the hands of good leaders colleagues. I struggled with limits I set for myself, only to find out that I can push them further if only I worked hard enough. Coming to the office was a struggle, knowing my internship would end in a few weeks. In the end I found myself amazed with the staff and the teacher fellows, struck by their passion and unbelievable talents. Looking back, I know that I could not have spent those two months anywhere else. Having learned all these, I’ve come to share their vision and hopefully soon join in their mission, while working hard to carry these values wherever I go.