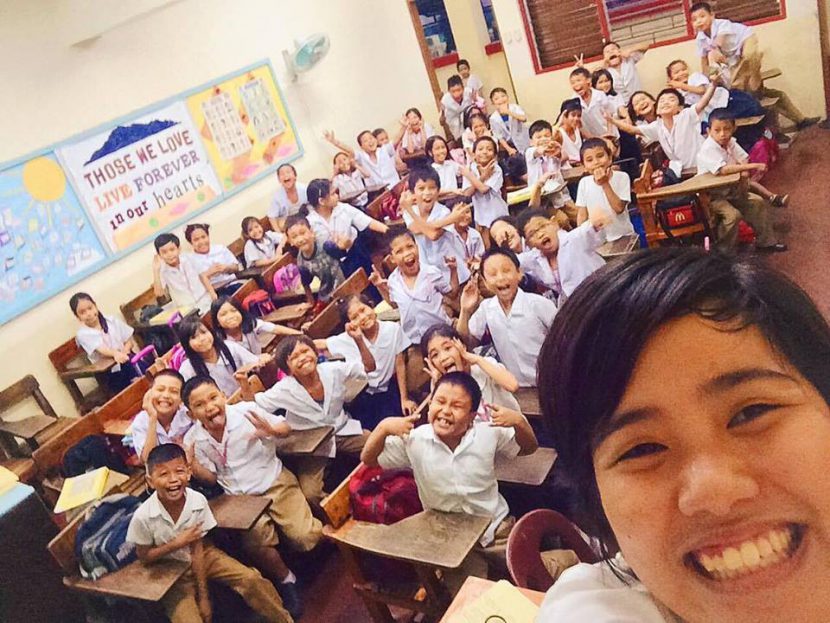 The school where I teach stands on the corner of Aurora Boulevard and EDSA, arguably one of the busiest intersections in Manila. From the classroom where I teach, you can see two train lines intersect. When the train wrapped with the Coke AlDub advertisement rolls by, you will surely take notice. Like my students – who look up, jump, squeal with kilig. Every. Single. Time.

My classroom is made up of third graders who are adorable and crazy at the same time. And, just like any other confined space packed with unique individuals, we have our fair share of ups and downs, triumphs and tribulations, joy and sadness. We are a society built on rules, routines, and procedures (that I had to lovingly teach and reteach over and over again), founded on mutual love and respect (most of the time), collectively working to grow and learn together. Just like a nation.

If we put it this way, then my classroom is my nation.

To be perfectly honest, I had a very hard time at the beginning of the school year. One of the classes I teach is the lowest section, home of the roughest, most troubled kids on the block. At times, I got so frustrated because I felt like very little learning was taking place. I tried my best to teach the subject matter: pangngalan, pang-uri, for example, but instead of listening to me, my students spent their time whacking rolls of cartolina on each other’s heads, hiding under tables and inside shelves, and running out of the room whenever they had the chance. They were not afraid of me, so they didn’t respect me.

In the middle of everything was the most powerful eight year old I know, Marvin. Apparently he had a berdeng singsing, a symbol that he was part of a fraternity in his neighborhood. He would order his classmates to get into a fistfight and they would do it without thinking twice. Aside from the disruptive behavior, he can get his classmates to throw curse words and dirty fingers proudly from across the room. Those weren’t the only things thrown at me: I cannot count the number of chalks that have been pelted in my direction, or the rags wet with spilled champorado that have been hurled at me just as I would leave a room.

To bring order to my classroom, to get my students to learn, I had to focus on one student: Marvin. I found out that Marvin lost his father a few years ago and that his mom’s a cripple. It’s his Lola, a street sweeper, who takes of him, and her salary is not enough to sustain him and his cousins. At home he is constantly nagged and berated by his Lola. His Lola is very hardworking and I believe (hope) she knows no other way to express her concern for her grandchild. Marvin feels the need to be strong for his family. Kaya pala matapang si Marvin. Kaya niya pala kailangan ipakita na malakas siya. Kaya pala siga siya.

After one bad day, I asked to talk to him after school. I asked, “Ano’ng klase kang bata?” He said “Masama.” I decided to take the dramatic route. I looked him in the eye and said “Alam mo, Marvin, naniniwala ako sa dito sa loob ng puso mo, mabait kang bata.” I thought we had a breakthrough when he started to cry. But it didn’t work. In the following days, he was back to being disruptive and disrespectful.

I had to think of another way. I spoke with my co-teachers, and we moved him from the lowest section to my advisory class, for a chance to start anew. He tried to establish his authority over his new classmates. He kept bugging them, punching them, and screaming at them. And, when all of my other kids had their heads down, he stood up to raise his middle finger. When it happened, I had my back turned to them, but I heard my students saying “Bawal yan dito. Hindi kami ganyan.” I was so proud of my kids.

When Marvin realized that he wasn’t getting any admirers by being mean, he started to change. From that day forward, I could only count in one hand the number of warnings I had to give him because of disruptive behavior. I very seldom had to talk to him after class ever again. He learned to get along with my students without having to scare them with this berdeng singsing and became a well-loved member of the class. Thankfully, nothing was thrown at me ever again.

One time he accidentally tore a page of a storybook in our class library. Silently, I started taping the page back. I saw him from the corner of my eye, shyly coming forward to say “Ma’am sorry po ma’am. Hindi na po mauulit.”

I no longer had difficulty with his section, the lowest section. With Marvin in a different class, his merry band of bullies calmed down and had been a lot easier to discipline. I gained their respect. They became able to sit still and raise their hands when they wanted to speak. The occasional cussword would escape their lips but I would just give them the Teacher Look and they would immediately say “Sorry, Ma’am!” I had been able to make them work in pairs and in groups and answer tests independently. From the dysfunctional, chaotic classroom, we were able to build a class, a nation that was progressing. My students were learning.

Marvin is only one of the many students who come to school feeling worn out and disheartened. So many children act up in school, disrupt class, and are unmotivated because they think they are not good enough, that they are not capable, that they are not loved. We Filipinos can be pretty mean sometimes. Mahilig tayo manglait, mamintas, mang-asar. My students get called bobo, tanga, walang alam, tamad, and walang pag-asa by their own parents. And, with such negative talk, how can a child grow and flourish?

This is what teachers do every day. We build the nation by building up each child to feel that they are loved, capable, important, and worthy. We remind them that someone believes in them, that they need not be afraid to try, that they can be themselves. We show them what hard work is like and what perseverance means. And, when they come to school with empty stomachs and bruised foreheads, it is our love and dedication that keeps them going.

Just as we teachers develop each student in order to create a productive classroom, it is crucial that we build the individual person in order to build the nation. We have to empower, develop, hone, and inspire Filipinos to be positive and productive members of society. We must produce a competent workforce. We must encourage discourse and creativity. We must forge compassionate communities. While systems, structures, and policy are important, it is the individual that implements, that thinks and innovates, that determines our success.

In April this year, Marvin moved up to Grade Four. Hopefully, he left my class a little wiser, braver, and kinder. This coming June, we teachers will be welcoming more Marvins to our classrooms. We’ll be standing in front of a new batch of faces, enforcing the same rules, instilling the same values, and working towards the same goal—to provide excellent and relevant education, to build the nation one classroom at a time, one student at a time.

Cher Liang Borlagdan graduated from the Ateneo De Manila University in 2015.  She teaches at Cubao Elementary School and is in her final year of the Fellowship.  This speech was adapted from a talk she delivered at ASPIRE Summit 2016.