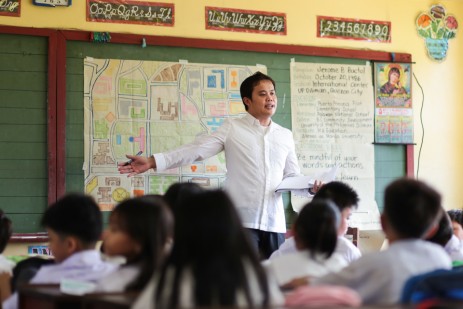 “Para kanino ka bumabangon?” Who do you wake up for?

Before the first day of class, we were told by our grade level chairman that we should be in school at 5:45 AM to prepare for the day. It was too early for me, even though I tried waking up early. I have always found it difficult to rise or go to work this early. But I made an effort to be early for the first week of class. Although most of the time I’m just five minutes early before the start of the class, being early once in a while eventually became a routine. Even with just two or three hours of sleep, I managed to do my work for the next six hours each day.

I found myself asking the question, who do I wake up for? I know it is not just for me, but for my students, who on our first day, inspired me to be an instrumental part of their success. At first, I really didn’t have a reason as to why I joined Teach for the Philippines. When people asked me why, I just answered why not? I wasn’t really sure and I didn’t want to give them an answer that would sound like I was tooting my own horn. I figured that if my reason would be solely to just spark change in the country, I could probably do more outside the classroom.

The first week of classes helped me build on that reason to leave my mark. Two weeks in, I feel that my students are transforming me more than I am transforming them. I also came from a public school and I know the culture in public schools, but I belonged to the top section as a student, and being there was like being in the “elite” within the marginalized sector. We were always given the best teachers, curricula, activities, facilities and instruction. I didn’t care about the “lower sections”. Actually, during those days, I even had the idea that the other students were just in school just because they were forced to. As a child, I didn’t understand the world around me. I thought that those students didn’t have any dreams at all. I was afraid of interacting with them because they were people I never wanted to care for.

But my first encounter with my students who belonged to the “lowest sections” according to their averages from the previous grade level gave me a reason to leave my mark by teaching for the Philippines. The vision of the organization came into the picture that every child should have access to quality education so that their socio-economic background will not determine their future. This is also in line with my favorite development theory — human development, which is about expanding choices for the people.

With this reason in mind, I wake up everyday of the week (yes, even on holidays and weekends) even though I’m tired because I know there are 54 young minds who are waiting for the opportunity to show that they can be something in this world. Even though my body won’t move anymore, I still find inspiration in the eyes of my students, who are so innocent and full of hope. Every time I think of quitting, I always picture the first day when I wore my sablay on top of my white barong (also known as the University of the Philippines graduation attire for men) and facilitating my students to come up with our goals for the school year. Whenever I’m frustrated with the things I have to do, I am always reminded of the talk I had with one of my students who has to work so he can go to school.  Whenever I complain about my situation, I should always think that most of my students struggle each day to go to school even without breakfast or snacks in the middle of the six-hour class. I wake up everyday not because I have to work, but because there are 54 precious lives who expect me to be in class and have another day of learning together.

My first week in class gave me the reason to continually wake up everyday for the next two years and beyond.

Jerome Bactol, 26, hails from Puerto Princesa, Palawan, and graduated from the University of the Philippines Diliman with a Bachelor of Science degree in Community Development. He is one of four Fellows assigned to Krus Na Ligas Elementary School.