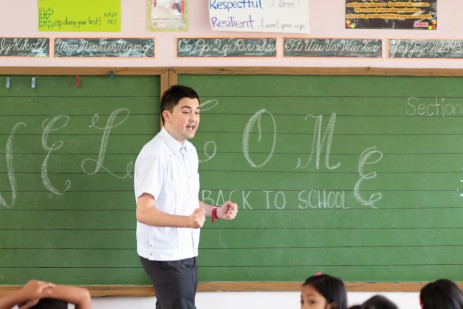 When I was in elementary school, class began at 9:15 AM. Here, 9:15 AM means my kids have five minutes until recess is over; it means they’re halfway done with a school day that began at six. When I was in third grade, my class began with a roster of thirty and whittled down to twenty halfway during the year, per school administration requirements to reduce class size and prioritize learning. As a public school third grade teacher here in Quezon City, my roster began with 53 students and has since grown to 57. I treated myself to a special dinner the day I realized I had committed all the names to heart. Then I realized there were over a hundred other students in the other sections of English and MAPEH I teach, all of whom were investing the same faith in me.

I have contemplated a lot on faith since coming here from the San Francisco Bay Area of Northern California (represent), and what it means to invest faith in people, institutions, anything. I’ve done this mostly because two months into the year, I already harbor so much frustration, anxiety, and fear regarding the situations my students are thrust into regularly. What began as “Why aren’t my students performing well?” transitioned to “How can I expect my students to perform well given their circumstances?” and it remains a question that renders me uneasy. Yet when the students file into my class, I have no choice but to snap out of my rut and smile. “Good morning, class.” The kids notice the rasp. The boys in the back of a gargantuan line struggle to hear what used to bellow from the front. “Pasensya na kayo, class. May sakit sa lalamunan ni Teacher. Pero susuko ba ako? Bawal! Kahit may sakit, kahit pagod, kahit na ano! Ayaw kong sumuko.” (I’m sorry, class. Teacher’s got a sore throat. But, will I give up? I can’t! Even if I’m sick, even when I’m tired, no matter what, I don’t want to give up.) My students smile, startled by yet another random burst of excitement. My voice turns quiet and I bend forward. “Susuko ba kayong lahat?” (Are you all going to give up?)

I smile back, even if it sounds rehearsed on certain mornings, even though we are told by certain teachers that smiling is the surefire way to lose control of your students, and even if I felt the night before like there was little to smile about. I want my students to believe that I believe in them. I want my students to know that my vocal outbursts are ridiculous to combat how ridiculous it is that I may very well be the only source of faith and belief for a number of my students. There are days where I question where I’m pulling all of this energy from, and I can’t come up with an answer. Then I realize that it’s perfectly fine. My students don’t need an explanation; they need to believe they can succeed even if nobody else will. They need someone who will believe in them regardless of their resources, regardless of what they’ve been told, and regardless of the labels unfairly thrust upon them. Accepting that role has been a tremendous task but one replete with reward.

Case in point – this past week I found myself substitute teaching for a “star section.” Some Grade 3 PM teachers needed substitutes, and I was among the Teach for the Philippines Fellows who were expected to come to the rescue. I wish someone had taken a picture of the look on my face when the news reached us. I had already weathered five hours of knots in my stomach, pains in my feet, and seemingly eternal noise. The thought of another six hours sounded lethal, considering the past five felt like they would never end. I entered this new classroom optimistic but unenthusiastic. Minutes upon the arrival of my new students, I soon remembered that this class was not like my advisory class at all. These students were grouped in Section 1. The educational superstars. The best of the best.

In my elementary school, you were either a Gifted and Talented Education (GATE) student or you weren’t. GATE education was supplemental and did not segregate you from the rest of your class. All students of all intelligences were in the same room, learning the same lessons and sharing the same experiences.

Here, it is not the same. Section 1 kids learn completely separate from the other sections, and the difference is staggering, especially for a teacher. I definitely did not handle this new class the same way I handle my advisory section.

The experience was eye-opening. I was able to do things I was not able to do during my morning shift. I used my characteristic Adam humor and the students laughed. I was able to ask higher thinking questions. I taught English class completely in English. I was able to use one hand signal only to quiet the kids down instead of a vast array of movements, chants, and claps. I even had a conversation with a student about why he wants to go to America (“Sir, so I can see things I can’t see here in the Philippines, like snow”) so badly. It was everything I imagined when I idealized the teaching profession. I couldn’t feel the pain in my feet, the knots in my stomach, or the ache in my head anymore.

And yet it was all bittersweet. Concomitant with my joy were feelings of guilt and shame. While I walked home, it dawned on me: during that whole experience, I didn’t miss my actual advisory class at all. I felt slightly upset that, when I woke up the next day, the conversations, strategies, and activities would not quite be the same. I began to make a mental Venn diagram comparing these two classes and it did not exactly make it any more exciting when I snapped back into reality. My feet began to hurt again and my head resumed pulsating. They’re going to be rowdy. Am I going to have to break up another fight? Will they actually do the seatwork or just sit?

I stopped moving entirely. Get a grip. You are not going to become another disillusioned person in the lives of your kids. You are here for them just as much as they are here for you. You said you weren’t going to give up. They said they wouldn’t either.

My advisory class may not be Section 1 but if I have anything to do with it, they will learn to do away with any label and instead, prioritize their ambitions. As an advisor I have accepted the role as a beacon of faith for students who invested in people and institutions and were left weary by both. This will require immense faith in myself, a ton of hard work and attention to detail, and yes, plenty of vocal outbursts to showcase excitement. The experience is a rollercoaster that sends you in all sorts of directions, but I’ve learned that it’s okay (and actually necessary) to be ridiculous if it means I’ve given a student a bit of confidence.

The last thirty minutes of class I always try to remind my children that their goal isn’t merely getting through third grade, into fourth grade, into high school, into a college, and snagging a lucrative career. I’ve been trying to show them that comprehensive education builds comprehensive citizens. It isn’t just about your marks but how you intend to use them to transform yourself, your people, and your country. I’m hoping that when the dust settles, my kids will emerge aware that nothing can prevent them from starting a revolution.

On a final note, my advisory class is fun, hilarious, adorable, and entirely wonderful, not in the least because they provide me daily with a bountiful supply of chocolates and thank you letters. Neither reward was present the day I substituted and I hold it against the star students in an unabashed manner.

Adam Thomas Crayne, 25, graduated from the University of California, San Diego with a degree in International Studies and Ethnic Studies. He is one of four Fellows assigned to Krus Na Ligas Elementary School.