Back to main PRESS page 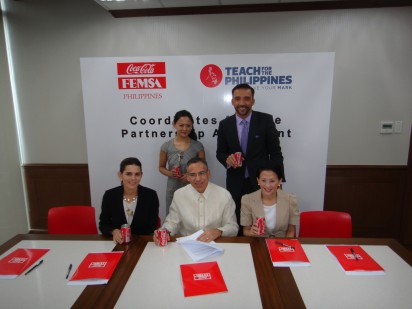 Coca-Cola FEMSA formalized a partnership with Teach for the Philippines on October 10, 2013. The two organizations will be collaborating to expand the FEMSA Coordinates for Life program to schools in the Philippines.

The event began with Juan Carlos Dominguez introducing The Coordinates for Life program. The program, which develops skills for decision-making, aims to supplement in-class learning with out-of-class experience. According to Mr. Dominguez, “decisions taken in early life by children [are] the causes of many of the things that society [is] suffering at a later life. It not only [has] to do with the quality of the education–which is naturally one of the bigger problems in our society– but also the type of tools that are given to take decisions.”

Coordinates for Life helps participants by hosting workshops and lectures while providing parents, teachers and other adults with resources to act as a good support system. Mr. Dominguez says that this is the reason Teach for the Philippines is a worthy partner for this endeavour: “The [Teach for the Philippines] program does not only focus on an intervention in the school but also an intervention with the teachers”. Through the program, he wants to help train our teachers to have the appropriate tools and knowledge to help their students make decisions that could have a great effect in the long term.

Our CEO Margarita Delgado went on to share a few words about the education system in the Philippines, after which our COO Clarissa Delgado expounded on why the partnership would be very valuable to our organization moving forward. She says that most people can pinpoint one transformational teacher in their life, and that “we have 53 of those individuals in our classrooms today.” Our staff and Fellows will be trained using the program starting next year.

We look forward to a continued partnership with Coca-Cola FEMSA and are very excited to see the impact this program will have in the future!